Türkçe
Dance Editorial
A A

Every week, find Tonakpa's pencil stroke and mood ticket. The Beninese cartoonist is interested this Wednesday in the new "military democracies" and the image they send back. 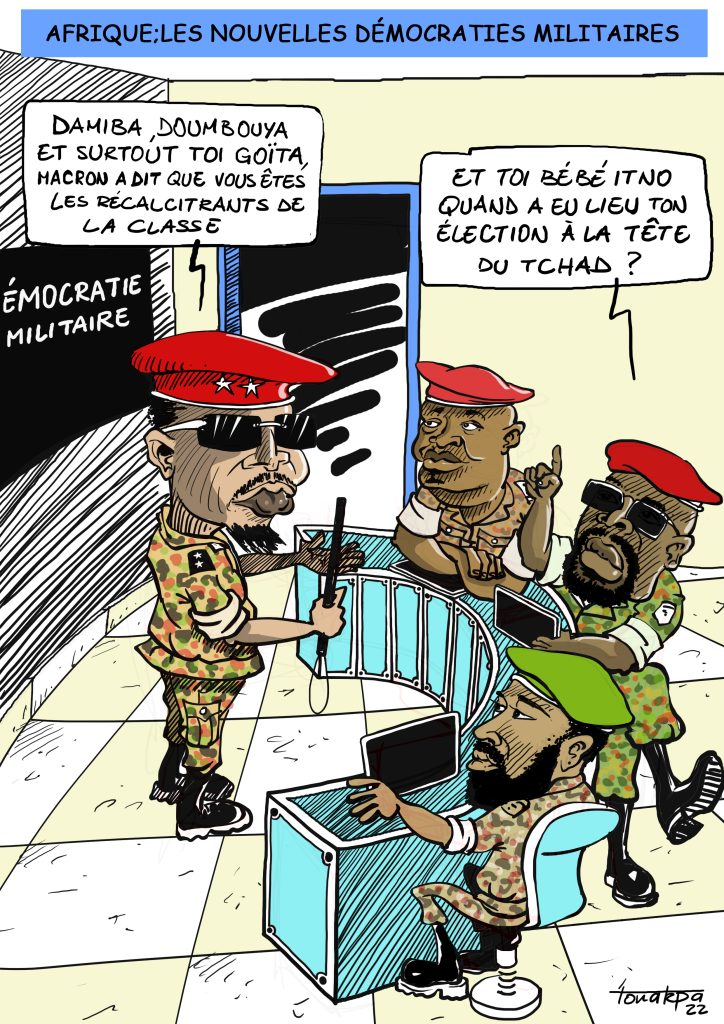 Mali, Guinea, Sudan, Chad… The year 2021 was marked by successive coups d'état at a sustained pace in Africa, and more particularly in West Africa. Before continuing in 2022, with Burkina Faso. Often benefiting from the support of their populations, soldiers have taken power from presidents who have run out of steam.

The question now arises of the future of democracy in these countries. In Sudan, the civilian Prime Minister Abdallah Hamdok ended up throwing in the towel, in a country usually under the yoke of the military. Chad, meanwhile, has not changed much, with one Déby — the son — replacing another — the father.

For Guinea, Burkina Faso and especially Mali, the situation is different. The juntas in place have an asset: that of being still and always supported by a large part of their populations, in particular thanks to speeches hostile to the former colonial powers.

The international community seems very helpless in the face of these new forces present. As the Africa Center for Strategic Studies summed up, at the time of the coup in Conakry, “recognizing the coup in Guinea would only encourage future military intervention. But giving back his chair to Alpha Condé would not restore democracy.

Today, it is clear that the military have arguments to put forward. In addition to the often disastrous results of presidents deposed by the military, it cannot be said that the juntas in question put an end to the rule of law in order to impose dictatorships.

"Not a coup, but an inaugural action"

In Guinea, the strong man of the army, Colonel Mamady Doumbouya, had thus assured that "this gesture that we are making today is not a coup d'etat but an inaugural action making it possible to create the conditions for a state. More precisely a rule of law”.

Except that the international community, ECOWAS and France in particular, already seem to condemn these new military democracies, after having blindly supported presidents who were won over to them. With, of course, two weights, two measures. Because if Déby son is not threatened, because loyal to Emmanuel Macron, Assimi Goïta and Mamady Doumbouya, they must have their backs and deal with sanctions imposed by an ECOWAS which blindly follows France.

However, it is only at the end of the transitions that we will be able to judge the results of the juntas in place. These new "military democracies" allow a redistribution of the cards. In Mauritania, Colonel Vall had succeeded in his bet, that of taking strong measures and not running for president.

We must now give the military a chance to reform their respective countries. It is only after a few years that we will be able to judge the merits or not of the various coups d'etat of recent months.