Rwanda: connectivity in Africa at the center of concerns

Since June 6, Rwanda has been hosting the World Telecommunication Development Conference (WTDC) of the International Telecommunication Union (ITU). The opportunity to discuss the problem of internet connectivity in Africa, limited by several factors, including digital security.

The 8th ITU World Telecommunication Development Conference (WTDC-ITU) is currently taking place in Rwanda, Kigali. It started on Monday and will continue until June 16. An important meeting for the telecommunications sector which, despite the limited publicity, brings together almost all the players in the sector. If the CMDT is usually the occasion for signing all kinds of memoranda or public-private agreements in digital infrastructure and security, it is also a political meeting.

This year, Rwandan President Paul Kagame drew participants' attention to the lack of connectivity in Africa. In addition, the ITU took advantage of the Conference to release its annual report on connectivity in the world.

According to the report, 32% of the world's population is still not connected to the internet. In Africa, the figure is 49%. As for mobile broadband network coverage, it is estimated at 82% of populated areas in Africa compared to 95% worldwide.

It would therefore be fair to deduce that the concern for connectivity in Africa is at the level of Internet Service Providers (ISPs). But also with potential users, the majority of whom are simply unable to obtain a device with web access or to afford a subscription. A lack of resources due to the economic crisis and its vagaries, such as unemployment, the cost of living, but not only.

Why is the internet so expensive in Africa? 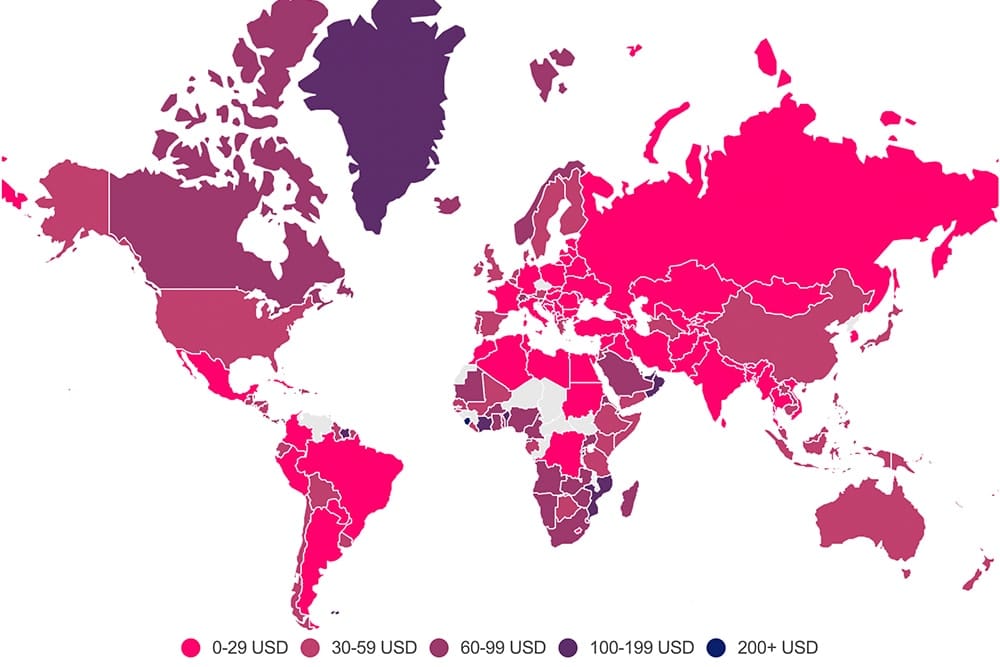 This does not take into account the disparity in purchasing power between African countries and the rest of the world. But that underlines the inaccessibility to the internet for a majority of the inhabitants in certain African countries.

“Broadband Internet access (in Africa, editor’s note) has not kept pace with the digital transformation and digitization of the economy in the world. If these inequalities are not brought under control, development will accelerate more and more in certain parts of the world while elsewhere it will slow down,” Rwandan President Paul Kagame lamented on Tuesday.

Indeed, in its report, the ITU has clearly established that internet connectivity closely follows the human development index. No causal link can be deduced from this comparison, but it remains relevant nonetheless.

Cybersecurity, another hazard of fast and less expensive connectivity

On the side of African national telecommunications providers, the observation is the same: setting up a solid infrastructure is expensive. The ITU estimates that: “Due to the overall low bandwidth provided by cable connections, much of the Internet traffic in Africa passes through expensive satellite links. Thus, in general, the cost of Internet access (and even more so broadband access) is unaffordable for the majority of the population”.

Several ICT players have offered their services to solve this problem. Huawei, Facebook and the 2Africa consortium, bringing together several telecommunications companies – Orange, Vodafone, MTN and STC among others – are already installing submarine cable connections in Africa.

However, these infrastructures still pose the same problem: cybersurveillance. According to data journalist Maxime Vaudano, the United States and the United Kingdom monitor a large part of the exchanges via the submarine cables from the Atlantic to the Pacific. This contrasts the concern for connectivity with the problem of cybersecurity.

On this point, Paul Kagame said: “Young people are the most connected members of society, but this also means that they are the most exposed to security and privacy risks online”.

So, admittedly, it's not a question of age, but rather of data hosting and encryption. Two factors that simply require computing power in hubs located on the territories of states or blocks of states. On this aspect, Africa is undoubtedly very exposed. African countries outsource even the hosting of government data, and few countries invest in data centers.

Read: Without data centers, there is no African digital sovereignty

Connectivity versus regulation: the role of the United States

Since 2012, the ITU, which organizes this conference, has been trying to convince States to adhere to the International Telecommunications Regulations (ITR). The UN agency believes, in fact, that with the hegemony of the Internet in telecommunications, global regulation should be adopted.

It was then in Dubai, in 2012, that the refusal to sign the ITR by 55 countries, all Western, put an end to attempts to install internet governance monitored by the ITU, and therefore by the UN. . Until April 28, the date of signature by 61 States of the Declaration for the Future of the Internet (DFI). An American treaty rejected by most African countries.

Read: Which African countries have signed the Declaration for the Future of the Internet?

The arguments put forward by the United States were those of establishing “a global internet” where “governments abstain from shutting down the internet or limiting access to it”. However, with interconnectivity and the allocation of domain names on the Internet already controlled by ICANN, it is not surprising that many countries are wary of the DFI.

The proposal of the ITU, and of the United Nations in general, was completely opposite. The organisation's secretary general at the time, Hamadoun Touré, explained that the priority was to establish "more effective frameworks to combat fraud and other types of crimes". Asked about the risks of censorship included in the 2012 ITR, Touré simply reminded member states that they already had the right to do so under the ITU Constitution.

Ten years later, therefore, the “risk of censorship” of the Internet by the States has been permuted, for 61 countries, by a total control of ICANN. A fatal blow for the digital sovereignty of the 4 African countries that have signed the DFI? Have.