New M23 attack in the DRC: Kagame in the crosshairs

While the United Nations, the African Union and three African presidents have launched mediation between Felix Tshisekedi and Paul Kagame, a new M23 attack, supported by Rwanda, killed in the ranks of the Congolese army on Monday.

Has Paul Kagame become the African Kim Jong-un? The turbulent neighbor of the Democratic Republic of Congo (DRC) does not say what it seeks to accomplish by supporting the March 23 movement (M23). But the latter has clear intentions: the rebel group has caused the death of hundreds of people since its return to action in eastern Congo, already scarred by terrorist attacks and natural disasters, among others.

On May 25, Rwandan soldiers deployed in support of the M23 were captured in the DRC. Kinshasa continues to officially accuse Rwanda of supporting the terrorist group. Kinshasa has also suspended RwandAir flights to the DRC and asked the Kigali ambassador for explanations. A large-scale diplomatic crisis, which was one of the subjects of the double summit of the African Union (AU) on May 27.

AU chairperson Macky Sall has instructed his Angolan counterpart João Lourenço to mediate between the DRC and Rwanda. After a first contact, Kinshasa released the Rwandan soldiers detained by the armed forces of the DRC (FARDC). A meeting is planned between Paul Kagame and Felix Tshisekedi. The latter traveled to Congo-Brazzaville on Sunday to consult his counterpart Denis Sassou N'Guesso. The DRC Head of State expressed his disappointment but also his predisposition to “build bridges rather than walls”.

A new attack by the M23 which will hinder the talks

Only here, on the morning of this Monday, June 6, a bombardment attributed to the M23, in the east of the DRC, showed that the discussions were far from successful: the attack left two dead and five wounded in the ranks of the FARDC. According to a press release from the spokesperson for the Governor of North Kivu, General Sylvain Ekenge, "the use of long-range guns testifies to the support that the M23 enjoys from its natural ally". A direct accusation against Rwanda, which will undoubtedly hinder peace efforts a little more. 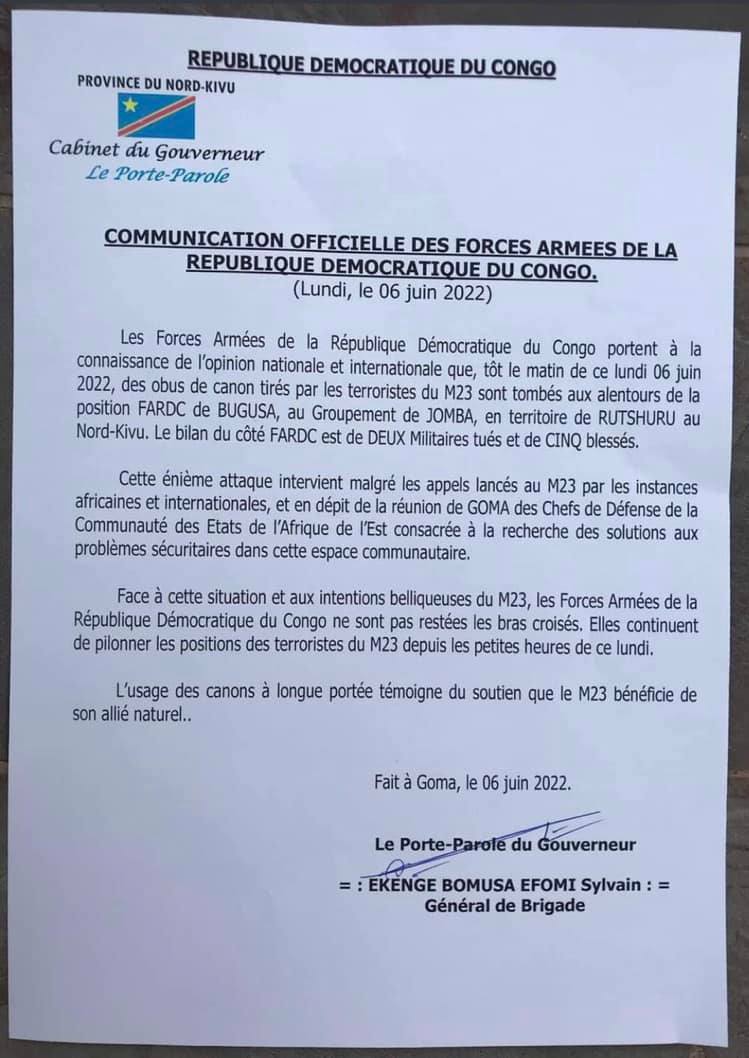 If the Rwandan collaboration in this attack is proven, it shows that Rwanda is not really concerned by the mediation. However, in addition to the AU, Macky Sall, João Lourenço and Denis Sassou N'Guesso, the United Nations have also taken up the case. Indeed, the UN special envoy for the Great Lakes region, Huang Xia, traveled to Kigali and Goma, in eastern Congo, over the weekend to call for "a ceasefire". -immediate fire. The UN official was also a few kilometers from the bombardment on Monday and the clashes that followed.

What is Paul Kagame looking for?

For his part, Paul Kagame has never tried to deny Kinshasa's accusations. However, his government has in turn accused the DRC of supporting the rebel group the Democratic Forces for the Liberation of Rwanda (FDLR). This group, from the Mai-Mai forces of the last civil war in the DRC, is presumed inactive. Nevertheless, for Kigali, it marks above all the large presence of Hutu refugees in eastern Congo. Rwanda is also one of the biggest exporters of coltan in the world, but it does not produce it. Many NGOs had already found evidence of coltan looting by Kigali-affiliated groups in eastern Congo.

The violence of the M23, however, remains inexplicable. If it is true that Kagame did not hide his irritation at the joint military operation between the DRC and Uganda over the past six months, recently renewed moreover, the Rwandan head of state, so talkative of habit, is silent today.

For pan-African activist Kémi Séba, “Kagame is a nightmare for lucid Africans”. The Beninese believes that eastern DRC is "destroyed by the poor governance of the Congolese oligarchy", but also by Paul Kagame. "Rwanda is a laboratory for the destabilization of Central Africa and the destruction of the eastern DRC", accuses Kémi Séba in a recent interview.

For his part, the American attorney general and director of Human Rights Watch (HRW), Kenneth Roth, called on the United Nations to investigate “the atrocities that Paul Kagame continues to commit in eastern DRC”.

The African authorities have not yet commented on the attack on Monday. What is certain is that if Kagame does not speak out on the subject, he will inevitably draw the wrath of his counterparts, concerned about the rise in tension between Rwanda and the DRC.