After two days of intense fighting between Congolese soldiers and M23 rebels, the latter captured the town of Bunagana, on the Ugandan border.

For several months now, the rebels of the March 23 Movement (M23) have been increasing their attacks in the east of the Democratic Republic of Congo (DRC).

For its part, Rwanda has accused the DRC of arming and supporting the rebel group Democratic Forces for the Liberation of Rwanda (FDLR). The Rwandan Minister of Defense had also, last Friday, accused the FARDC of having fired rockets into Rwandan territory.

A situation that continues to escalate, therefore. If hopes for peace rested on a future meeting between Presidents Paul Kagame and Félix Tshisekedi, the events of this Monday have changed the situation.

Indeed, in "an act that was not premeditated", the M23 rebels took over the strategic town of Bunagana. Before the rebel group's surrender in 2013, this city was its stronghold in eastern Congo, and after that date it had become a real commercial and diplomatic hub in the Great Lakes region. Indeed, Bunagana opens onto a very profitable customs post separating Uganda and the DRC. And the only road crossing North Kivu towards Rwanda passes through Bunagana.

The FARDC defending the city retreated towards Uganda, and more than 30 displaced civilians are now on the roads.

Everything is complicated for Kinshasa

The M23 for its part accuses a “coalition of Congolese armed forces and the FDLR” of “bombing and harassing” its positions and of “terrorizing the civilian populations”. The M23 called on the President of the DRC, Félix Tshisekedi, to "seize this opportunity to put an end to the violence caused by this useless war".

The Congolese government, for its part, accused Rwanda of supporting the M23 with 500 soldiers. Kinshasa also qualifies the M23 as a terrorist movement. 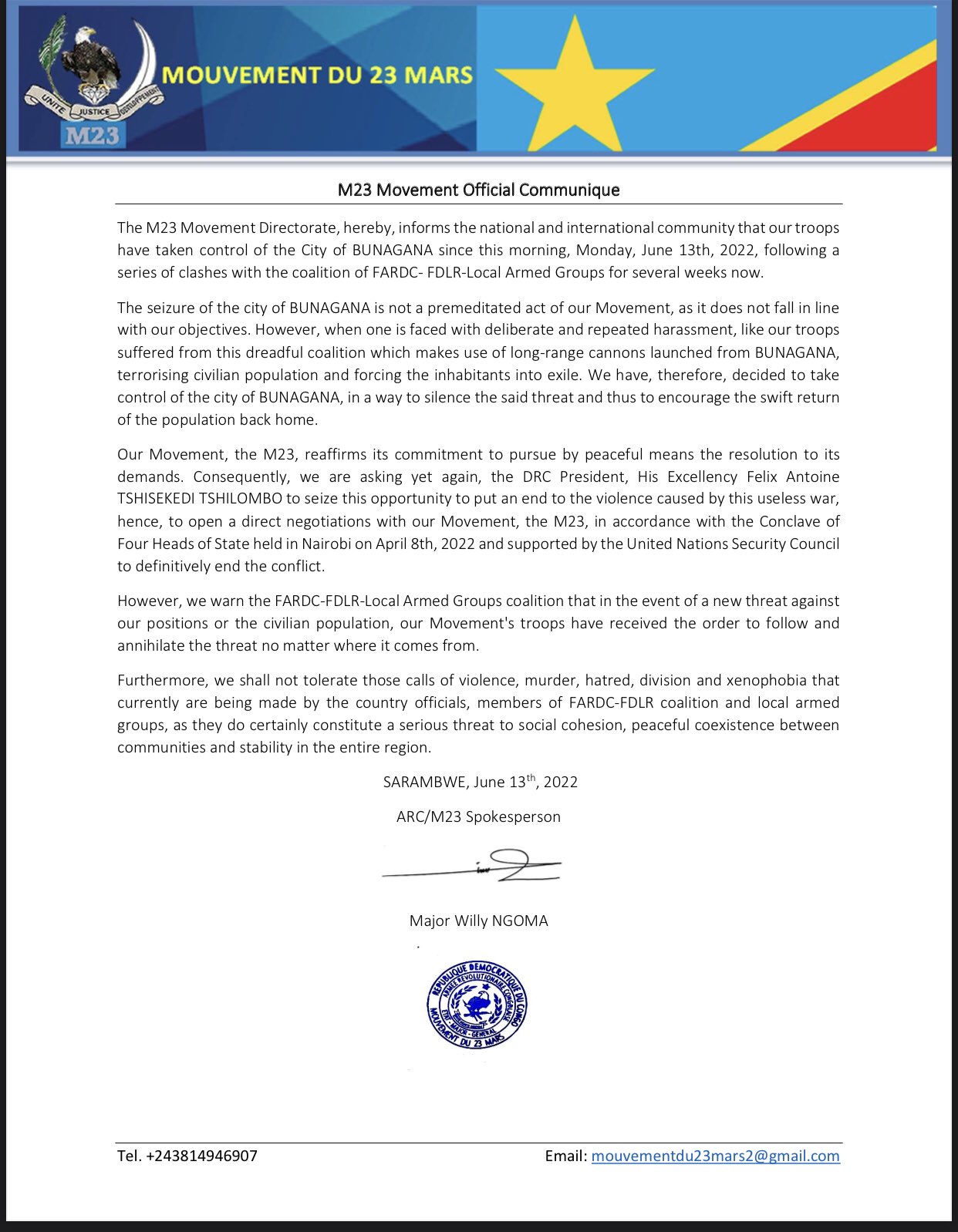 After the capture of Bunagana, two “anonymous military sources” reportedly told Reuters that the M23 was also supported by… Uganda. However, insofar as the neighboring country is militarily engaged with the Congolese army, but has also welcomed refugees fleeing Bunagana, these accusations are undoubtedly part of an agenda specific to its instigators.

DRC President Felix Tshisekedi has yet to comment on the M23 invasion of Bunagana. His staff, on the other hand, speaks of an “occupation of Bunagana by Rwanda”. Be that as it may, whether it is talks between Kinshasa and the M23, or between the DRC and Rwanda, things get complicated.

Read: New M23 attack in the DRC: Kagame in the crosshairs

The United Nations have condemned the M23 attacks against Monusco positions. As a reminder, eight blue helmets had been killed at the end of March. And two others were killed last week, Tuesday, by the M23 as well.

The United States Senate for its part condemned on Monday “Rwandan support for the M23 rebels who attack civilians, UN peacekeepers and the FARDC in eastern DRC”. The US House Foreign Affairs Committee called on the international community to "immediately investigate and hold those responsible to account".

Jean-Luc Mélenchon at Matignon: what it would change for Africa

Tunisia: an IMF loan that could weaken social peace