After two days of demonstrations in Libya, causing in particular the burning of the Parliament of Tobruk in the east, Prime Minister Abdel Hamid Dbeibah would have announced, this Sunday, July 3, his resignation.

"Let's all resign and let the people vote!" ". This is what the Prime Minister of Libya, Abdel Hamid Dbeibah, said on Sunday July 3.

While the organization of elections in Libya has been delayed, and there are many untimely power cuts during periods of intense heat, large demonstrations have been organized in all Libyan cities.

In the east, in Tobruk, the demonstrators took over the seat of the House of Representatives (HoR), before setting it on fire on Saturday night. In Tripoli too, demonstrators mobilized by the thousands, demanding the resignation of HoR leader Aguila Salah, and his Senate counterpart Khaled al-Mishri.

The demonstrators, who wore yellow vests – like the French politico-social movement opposed to the fiscal policy of Emmanuel Macron – demanded that the two parliamentarians, who could not agree on the framework of the elections , resign.

However, the demonstrators did not attack the government of national unity (GNU) of Abdel Hamid Dbeibah excessively. Dbeibah nevertheless expressed his support for the protesters. Indeed, the Libyan Prime Minister supported elections in 2022. And his roadmap depended greatly cairo talks, led by Manul Chief Stephanie Williams and attended by Aguila Salah and Khaled al-Mishri.

Finally, surprising everyone, Abdel Hamid Dbeibah announced his resignation this Sunday, according to the media Al-Bilad News and One Tn.

In the press release announcing his resignation, received by the editorial staff of the Journal de l'Afrique, Dbeibah indicates: "In this decisive hour that our beloved country is going through, and in view of the internal political conflicts that the State is going through, (...) I I felt compelled to tender my resignation as head of the government of national unity from the date of issue of this statement". And to continue: "I wish to have carried out my duties during the past period, in all loyalty and honesty before God and the great Libyan people".

The Libyan Prime Minister also highlights the "great popular movement" which calls for "the fall of all political organizations". 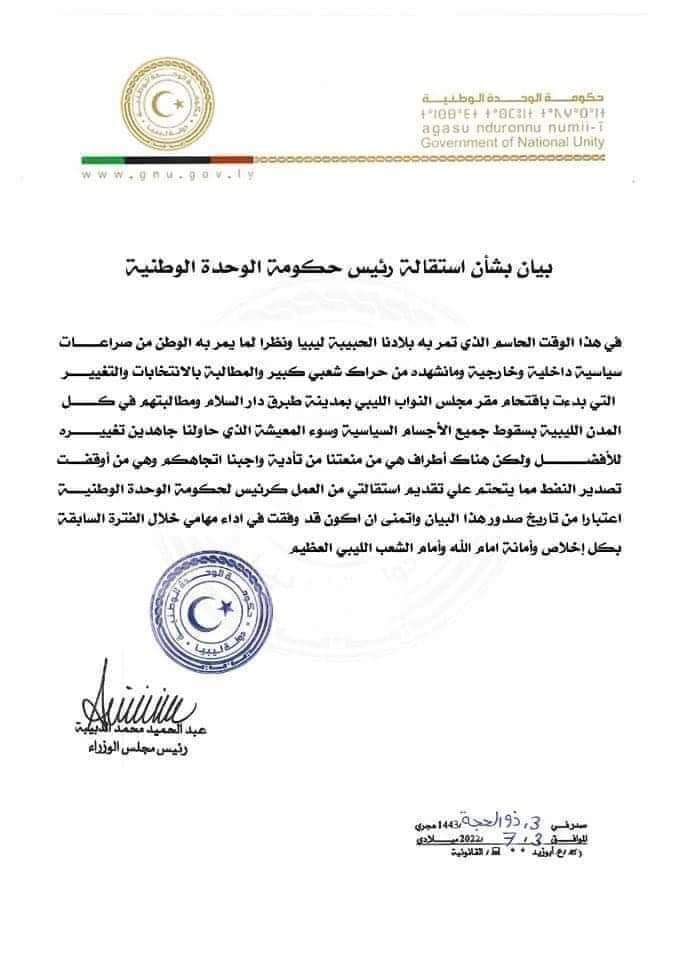 But before Dbeibah's resignation press release filtered, there was no reason to believe that he would come to such a decision. First, over the past few weeks, Dbeibah seemed to be consolidating his position in Tripoli against his HoR-appointed rival, Fathi Bachagha.

And precisely, in his resignation announcement, Dbeibah deplores "parties which have prevented (the government) from fulfilling its duty, and which have stopped oil exports".

Moreover, unlike Dbeibah, Bachagha condemned the attack on the seat of Parliament, calling the demonstrators "saboteurs loyal to the old regime (of Gaddafi, editor's note)".

In any case, the security situation suggests that Tripoli, unlike Tobruk and Benghazi, will be relatively calm. Dbeibah's government could also be maintained until the political situation clears up. It remains to be seen whether the leaders of eastern Libya - Bachagha, Salah and Khalifa Haftar - will give in to popular pressure.

Burundi, sixty years after independence: a country at peace… and in crisis

CAN 2023 postponed by six months