Food shortages in Africa: whose fault is it?

As grain stocks dwindle rapidly due to conflict in Ukraine, the Horn of Africa and North Africa, food shortages are worrying. Europe fears a major “migration wave”.

The scenes have become frequent in several Tunisian brands: flour and rice have disappeared from the stalls and, now, these foodstuffs, which have become rare, are sold under the cloak. Scenes that we see all over the continent.

Last Monday, the European Commissioner for Economic Affairs, Paolo Gentiloni, declared that the conflict between Ukraine and Russia would have “dramatic consequences for African countries dependent on grain imports”. "This will not be a problem in Europe, where the concern is above all inflation, rather than low availability", specifies the diplomat.

This exposes the limits of the globalized economic system. A system in which Africa will bear the brunt of a war, of which it is neither the instigator nor a party.

In the Horn of Africa, drought had already taken its toll, after three years without a proper rainy season. Today, 292 head of cattle have been destroyed in January alone. Countries like Ethiopia and Somalia, more than 000% dependent on food products imported from Russia and Ukraine, are dying of hunger under the cynical gaze of the “international community”.

In all the countries of North Africa, as well as in Burkina Faso, the Democratic Republic of Congo (DRC) or even Sudan, probable “hunger riots” risk destabilizing the regimes in place.

Also to remember the observation of the French economist Charles Gave, who recently recalled that "every time the price of wheat has risen in history, there have been revolutions in North Africa".

French political activist Lydia Guirous warns: “Yes, we can reassure ourselves in France by saying that we only eat a third of our cereals. And there will be no shortage problem for us… But hunger in North Africa will inevitably be accompanied by uncontrollable migratory flows and what will we do there? How will French society react? No one knows but above all let's not play the ostrich policy and let's anticipate! ".

The editorial of @LydiaGuirous : War in # Ukraine

🗣 “Hunger will therefore settle in Egypt, but also in Algeria, Morocco, Tunisia. Hunger, its share of social conflicts, riots, political destabilization and a wave of migration to come…”

A speech not really humanitarian. The right-wing activist believes that a famine in Africa would have irreversible migratory consequences. An unsurprising cynicism, which finds an echo in the Western media as the food crisis caused by the conflict between Ukraine and Russia intensifies.

What is this cereal shortage due to? It is quite simply caused by the cessation of Ukrainian production, but also by the direct and indirect ban on Russian exports. And on this level, African countries, even those most affected by the shortage of cereals, seem paralyzed and devoid of solutions.

So, if the European countries fear above all the increase in immigration, on the side of Africa, it is a humanitarian catastrophe which is predicted, as well as a social discontent which risks having political consequences.

But with 14% of world wheat, and more than 40% of exports, it is Ukraine and Russia. When Lydia Guirous estimates that there are only "5 months of cereal stocks left on a global scale", the crisis in Africa seems to be even more immediate.

Would the most obvious solution to deal with this crisis, caused by a war, be peace? If this is the case, it is clear that African leaders are doing little to promote this indirectly vital peace for the peoples of the continent.

The African countries most affected by the grain shortage have all condemned Russia from the UN platform. Since…nothing. No African leader, head of state or prime minister has met with Ukrainian diplomacy or Russian leaders to offer solutions.

However, many African countries that have preferred neutrality at the UN have the credibility and the diplomatic capital to launch talks or, at least, participate in them on one side or the other.

For example, Kenya and Somalia have strong ties with Ukraine, as do Uganda and Angola with Russia. Without forgetting, of course, the diplomatic weight that a trip by Cyril Ramaphosa (South Africa) or Macky Sall (Senegal) would have.

Even the most experienced African leaders in geopolitics, such as the Congolese Denis Sassou N'Guesso or his neighbor Félix Tshisekedi seem to be absent subscribers in this file.

Besides an unnatural apathy, Africa is content to observe, powerless, the consequences of this conflict on its economy and its stability. 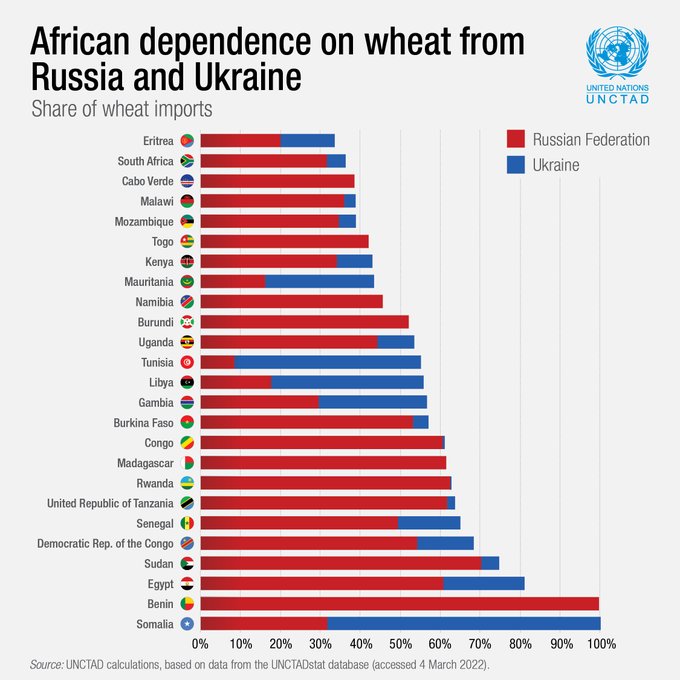 On the NGO side, the silence is deafening. The illustrious Oxfam, for example, contented itself with urging “donors” to “urgently close the funding gap for the United Nations humanitarian appeal and get the funds as quickly as possible to the humanitarian organizations local”. "The countries of East Africa are dependent, for some, on Ukraine and Russia, up to 90% of their wheat imports", recalls the British NGO.

But which donors are we talking about? And what appeal from the United Nations? Meanwhile, the organization continues, 21 million people are at risk of extreme starvation in the Horn of Africa alone.

United Nations Secretary-General António Guterres said: “We must do everything possible to avoid a hurricane of famines and a collapse of the global food system. This war will otherwise affect the poorest first, and will sow the seeds of political instability throughout the world”.

The head of the UN also recalls that the price of foodstuffs, according to estimates by the Food and Agriculture Organization of the United Nations (FAO), has already "exceeded those of the beginning of the Arab spring and of the 2007-2008 food crisis.

What does Eric Zemmour have against the Senegalese?