In an OpinionWay survey for Le Journal de l'Afrique, the populations of several African countries give their feelings about the actions of their respective governments in the face of the risk of food crisis.

Is Africa on the verge of the most serious food crisis in its history? According to Oxfam, “West Africa is experiencing its worst food crisis in a decade, with an estimated 30 million people going hungry”. Climate change, but also the rise in fuel prices and the shortage of fertilizers, consequences of the war in Ukraine, suggest the worst.

According to the World Food Program (WFP), African countries are threatened by “the worst food and nutrition crisis in ten years”. And if West Africa is particularly scrutinized, several countries have to deal with growing inflation, ranging from +15% to +30%, in Burkina Faso, Sierra Leone, Nigeria and Ghana. A situation "getting out of control", according to the WFP, which warns that in the Sahel alone, nearly 8 million children under the age of 5 could suffer from "severe malnutrition".

If the United Nations (UN) recommends, in order to avoid the worst, to "guarantee a regular flow of food and energy on open markets by lifting all unnecessary restrictions on exports, to allocate surpluses and reserve them for those who need them and to control food prices to calm market volatility", governments are having a hard time stemming the crisis.

But how do people deal with this situation? From Senegal to Sierra Leone, via Côte d'Ivoire, Botswana, the Democratic Republic of Congo (DRC) and Burkina Faso, OpinionWay* interviewed the populations of six countries for Le Journal de l'Afrique to find out their level of confidence in the actions taken by their respective governments in the face of the risk of a food crisis. 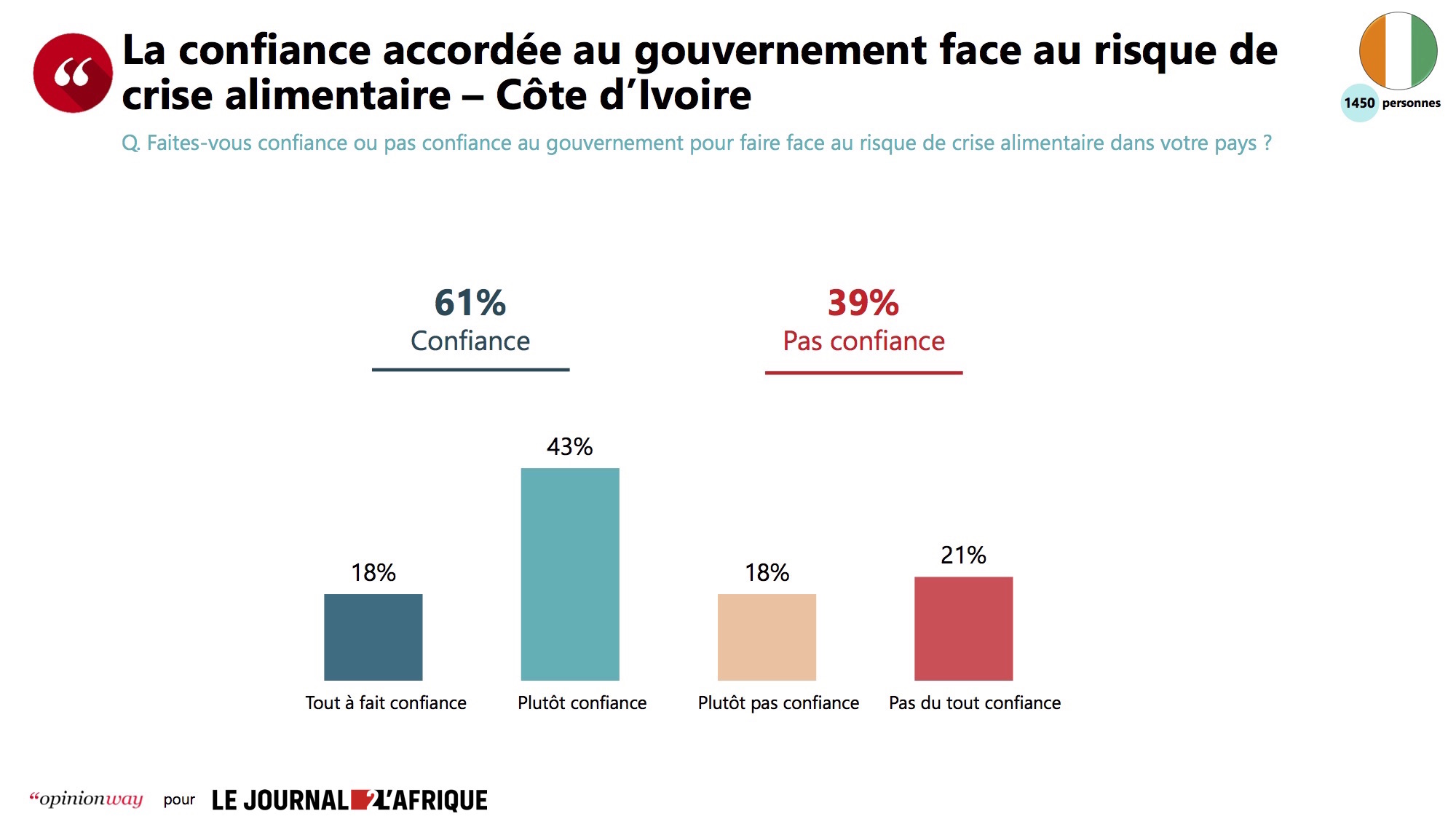 It must be said that government communication is reassuring: Côte d'Ivoire recorded an inflation rate estimated at 4,1%, much lower than among its neighbours. Above all, the Ivorian government has fixed the prices of basic necessities, such as bread or oil, and capped rental rates. The government of Côte d'Ivoire has also disbursed 6 billion CFA francs per month in subsidies, according to Amadou Coulibaly, the Ivorian Minister of Communication.

In Sierra Leone, trust is essential

The Sierra Leonean government also mostly gives satisfaction to the people. According to the OpinionWay survey for Le Journal de l'Afrique, 58% of respondents trust their leaders in the face of the risk of a food crisis. 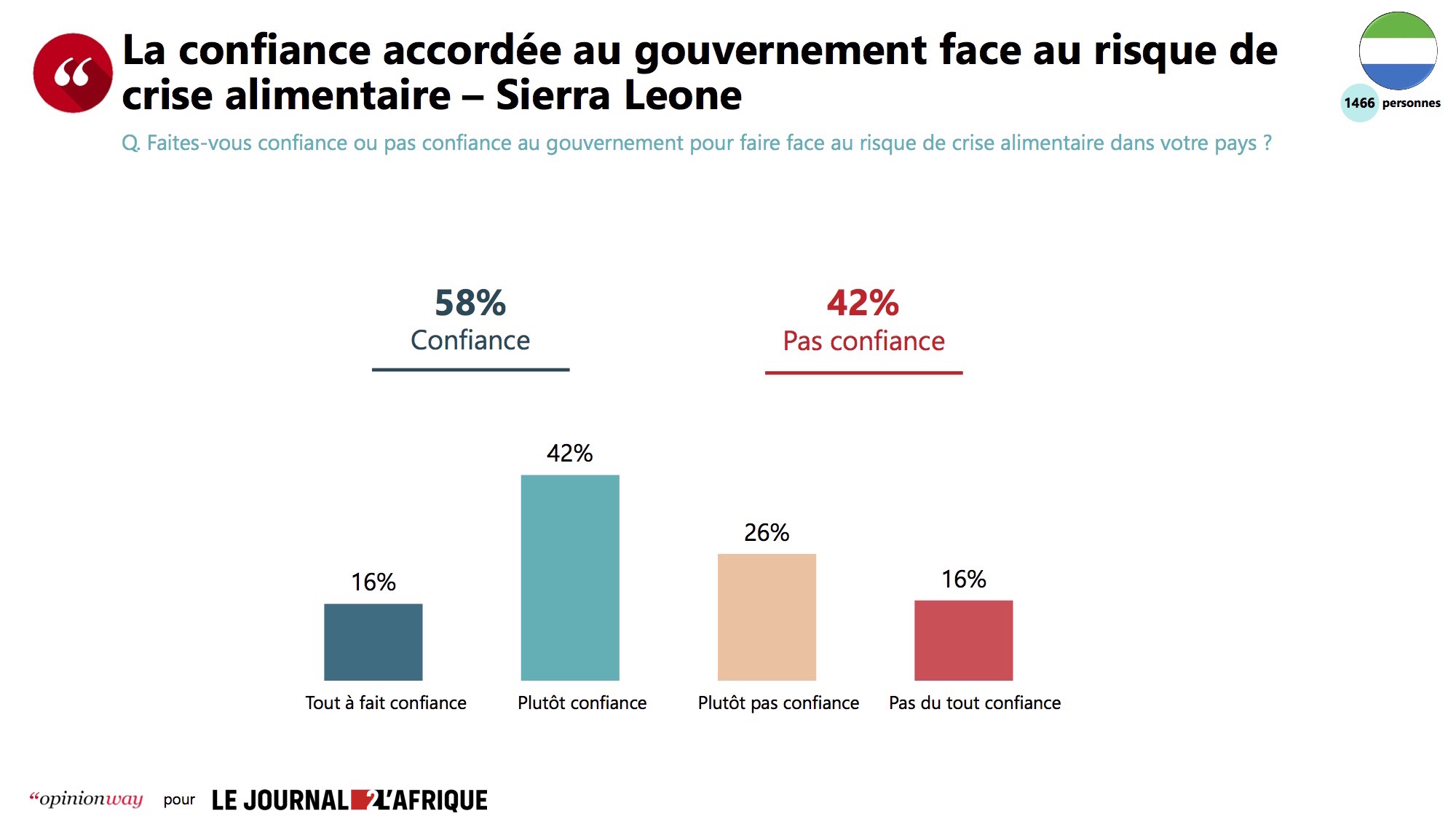 According to international organizations, 1,3 million people are in acute food insecurity in this country. But a donation of 2 million dollars from the African Development Fund has been announced, it should make it possible to increase local food production tenfold. By 2023, the government has announced that it wants to distribute 1 tonnes of seeds and 675 tonnes of subsidized fertilizer to Sierra Leonean farmers, but also distribute nearly 1 tonnes of additional rice.

The Senegalese government in the midst of a crisis of confidence

But Côte d'Ivoire and Sierra Leone seem to be exceptions. The populations of several African countries are indeed more skeptical. "The confidence of Africans in their government to deal with a risk of food crisis is disparate," explains Bruno Jeanbart, vice-president of OpinionWay to the Journal de l'Afrique. It is mixed in four of the countries surveyed: Senegal 49%, Botswana and DRC 50% and Burkina Faso 54%. On the other hand, it is high in Côte d'Ivoire (61%) or Sierra Leone (58%)”.

Senegal is indeed the country in which the populations are the least confident vis-à-vis their government. 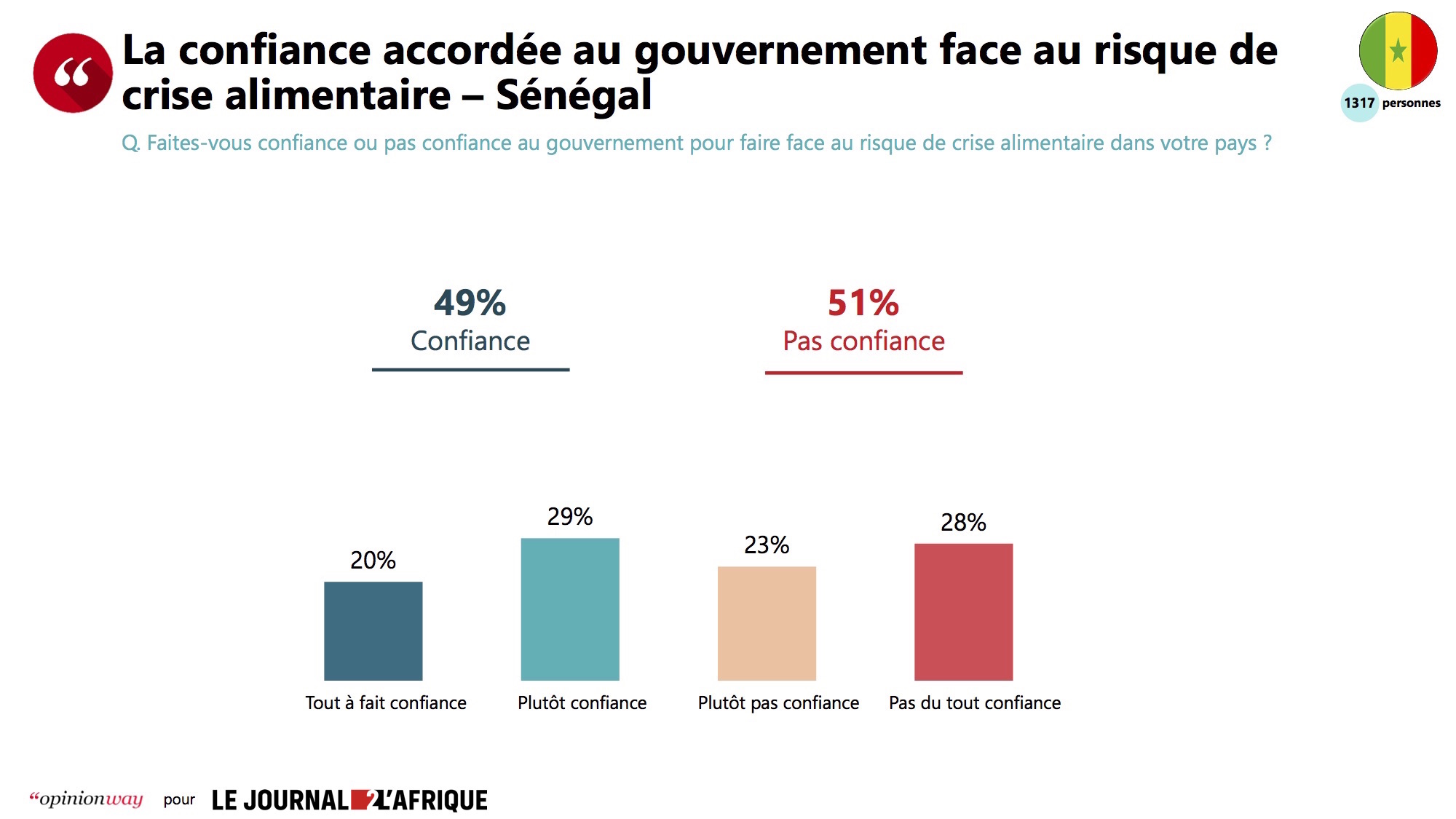 In the midst of a political crisis, Macky Sall has to face the mistrust of the Senegalese. However, the country set up, in 2020, an "Emergency Food Security Plan" which aims to "contribute to building, with the community of actors involved in the fight against food and nutritional insecurity, a response rapid, vigorous and effective, commensurate with the triple health, food and social challenges facing the country”.

Due in particular to Covid-19 and the conflict in Ukraine, Senegal recorded inflation of nearly 9%. And while the prices of foodstuffs - oil, rice, onions, among others - have doubled, the government drew up a rather positive balance sheet during the campaign for the last legislative elections: increase in the salaries of civil servants, distribution of 80 CFA francs to half a million families deemed to be in a vulnerable situation or even revaluation of retirement pensions. Exceptionally, the government also lowered taxes and customs duties on wheat and hydrocarbons.

Young people skeptical of their rulers 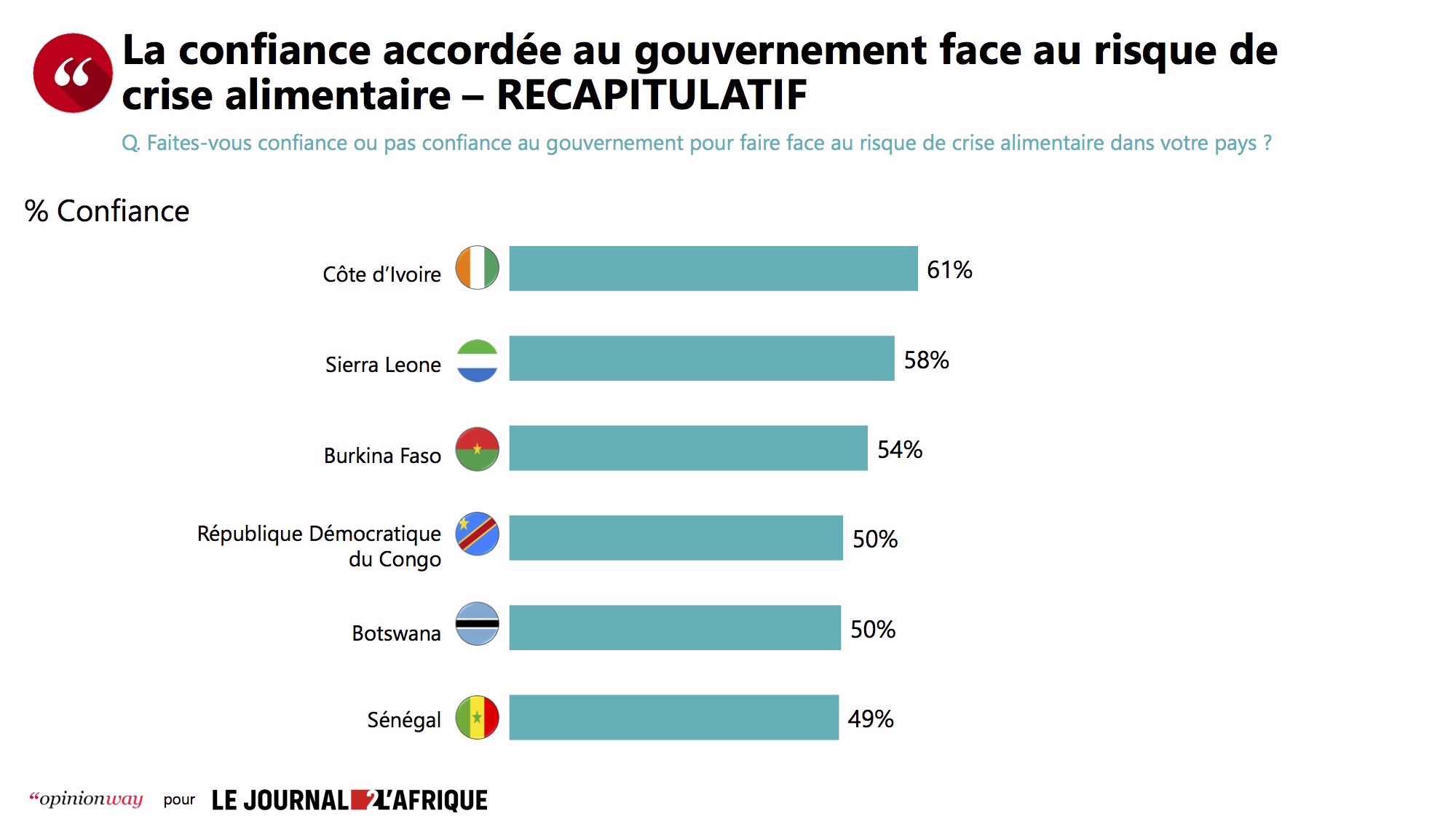 The governments of the Democratic Republic of Congo and Botswana are not much better off than that of Senegal. 50% of respondents in these two countries say they are confident about the actions of their respective governments.

With, among the people questioned, significant disparities. "In detail, it should be noted that trust in the government to deal with a food crisis is systematically lower among the youngest (under 25) and always significantly above average over 40" , says Bruno Jeanbart. Data that shows that the gap between young voters and their rulers is widening.

In Africa, the generic market is struggling to develop