She has rubbed shoulders with 14 Prime Ministers and has seen as many states leave the British Empire since her coronation. Outside the British Isles, Elizabeth II is also the queen of 14 islands. And as she celebrates her 70 years of reign, at 96, she symbolizes the decline, in Africa, of the British colonial empire...

Between June 2 and 5, more than three months late, the United Kingdom celebrated the platinum jubilee - 70 years - of the reign of Elizabeth II. If the festivities were more timid in the other countries of the Commonwealth, they were non-existent in Africa. Indeed, with the exception of African heads of state who congratulated the queen on her 70 years on the throne, only four jubilee beacons were lit - three in South Africa and one in Kenya.

It was in Kenya that it all started for Elizabeth II. More precisely, while the Queen was visiting the royal residence in Aberdare Park, she learned of the death of her father George VI. The Commonwealth was more then than it is now—a mere international organization, and an effigy of the British Empire. Indeed, when Queen Elizabeth II acceded to the throne, the African countries subject to British colonization were just beginning to see the first independence movements born.

During her first 10 years of reign, Elizabeth II was the queen of the second largest colonized African territory. And as the British Empire crumbled everywhere, and the British response was torn between the inexperienced Elizabeth II and the powerful Prime Minister Winston Churchill, desperate to retain British power over the colonies, many horrors took place. been committed in the name of the British Crown.

And this is only what we know of. The shit they couldn't hide. Operation Legacy systematically destroyed most of their recent colonial history to protect the idea of ​​great Britain.

Kenya and the taboo of the Mau Mau massacre

It is undoubtedly in Kenya, where Elizabeth II acceded to the Windsor throne, that the greatest massacre of British colonization in Africa took place. What is now called the Mau Mau Revolt was actually the third most casualty war of African independence, after Algeria and the Belgian Congo. A massacre that started six months after the coronation of Elizabeth II, and ended with the death of nearly 100 Kenyan fighters and 000 civilians in British camps.

But colonial memory in Kenya is today treated as a taboo. Shortly after the coronation of Elizabeth II, in the Hauts Plateaux, a vast land converted into plantations run by British settlers, a war of attrition began. Jomo Kenyatta's arrest prompted Mau Mau leader Dedan Kimathi to take up arms. And truth be told, if British soldiers hadn't turned to Nigeria, where the War of Independence took longer to come to fruition, Kenya probably would have failed to get its own without giving many more lives.

The writer Patrick Gathara also says: "While the Western media seem obsessed with the reactions of Prince Louis (great-grandson of Elizabeth II) to the parade of the Royal Air Force (during the weekend celebrations, editor's note ), I doubt journalists would spend time imagining the reactions of my father, who was his age in 1953, as British planes flew over the concentration camps in which Elizabeth II's Britain reduced to enslaved 1,5 million Kenyans demanding their freedom, and dropped nearly 6 million bombs”.

The Kenyan example, despite the lack of records, is considered one of those where the British Empire most failed to hide its crimes.

Jamaican historian Rosalea Hamilton highlights the collective oblivion of the crimes of British colonization, in Africa and elsewhere. “When you think of the Queen today, you think of a nice old lady,” Hamilton quips, “but her family's fortune was built on the backs of our ancestors. We are grappling with the legacies of a very painful past”.

Why then, unlike Portuguese, Spanish, French, Belgian, German or Italian colonization, British colonization seems the most spared by pan-African reviews? Well, between 1954 and 1969, the British domestic intelligence services, MI5, launched Operation Legacy. It was a propaganda and evidence-destroying operation conducted by the Colonial Office — the Foreign and Commonwealth Office today — aimed at protecting London from accusations of crimes against the humanity. The concept was then quite young, created at the end of the Second World War in the Statute of the Nuremberg Military Tribunal. And, ironically enough, institutionalized by the London Accord…

In 2011, the British government admitted to having records of the Mau Mau revolt. In 2013, he apologized for numerous abuses, including the bombing of Cairo during the Suez Crisis, massacres in northern Nigeria in the 1960s. More than 20 documents that had escaped Operation Legacy were published. But this is only the tenth of the damning evidence for the massacres of the British army during the reign of Elizabeth II.

We can also see that the missives documenting the Boer War, or British support for the ANC in South Africa, are intact. But in no way have London butcher shops in Ghana, Egypt and elsewhere been revealed.

The soft power of Elizabeth II

As for excuses, which are never enough to repair decades of colonization and even more of slavery, Elizabeth II managed to dodge them throughout her life. His son and heir Charles spoke of it only once, calling slavery a "terrible atrocity". His son William recently expressed his "deep sadness". But if the British government had, over the years, issued shamefully anonymous apologies, the royal family is proud of its colonial past in Africa and elsewhere.

Prince William vocalizes this pride elsewhere: “We support with pride and respect your decisions concerning your future. Our relationships evolve and our friendship remains. A speech delivered in the Bahamas, for the latter, as well as Belize and Jamaica. But nothing for India, Pakistan, Uganda, Malaysia, Kenya, Nigeria or Ghana, where the British Empire had committed its worst abuses.

Today, the House of Windsor no longer has any institutional power in the United Kingdom, the Commonwealth or elsewhere. British neocolonialism in Africa has been replaced by a soft power that sometimes manifests itself in the actions of powerful British clandestine intelligence, MI6, against opponents of exile. But, above all, language and religion. Because unlike French-speaking African countries, English is rooted in the culture of East Africa and Southern Africa. Official figures speak of 6 million native English speakers. However, the United Nations mentions in a report dating from 2019 between 200 and 350 million Africans who speak English.

As for Anglicanism, it has only grown, especially in Central Africa and the Gold Coast since Elizabeth II became Governor of the Church of England. Then, since the Gafcon conference, episcopalism has given new impetus to the spread of all Protestantism in Africa. The largest religious movement answerable to the Church of England is currently found in Nigeria, Ghana, DRC and Ivory Coast.

This power “without power” is above all, de facto, the invention of Elizabeth II. While it is true that the English throne has delegated most state powers to Parliament since the XNUMXth century, the popularity of Elizabeth II showed that Buckingham almost always manipulated government. The United Kingdom has had its share of government crises during her reign, and Elizabeth II has always had the final say in the choice of Prime Minister.

Nevertheless, despite the many successive Prime Ministers at the head of Great Britain, Elizabeth II took responsibility for few, if any, mistakes made by the heads of British government. This is all the more true when it comes to diplomacy, especially in the Commonwealth realms, and especially in Africa.

A video had leaked in 2016, during the party of the 90e anniversary of Elizabeth II, accompanied by the London Summit against corruption. British Prime Minister David Cameron then told the Queen that Nigeria was “fantastically corrupt”. A comment greeted by a broad smile from Elizabeth II. The Scandal had tainted, then, the Prime Minister at the end of his mandate, and aroused the anger of Abuja.

After the abolition of apartheid in South Africa, Elizabeth II is often remembered as one of the leaders closest to Nelson Mandela. The latter also credits him with “the unfailing support” of the fight against apartheid. But few remember the friendship between Elizabeth II and her Prime Minister Margaret Thatcher, the dubbing of the latter of the apartheid regime under Pieter Willem Botha. And even if the latter had preferred to leave the Commonwealth than to abolish the power of the white minority in South Africa, Thatcher continued to call Nelson Mandela and the ANC “terrorists”.

And it hasn't changed in time

As for the current Prime Minister of the United Kingdom, Boris Johnson, it is the same who wrote in 2002 that “Africa may be a stain, but it is not a stain on our conscience”. And to continue: "The problem is not that we were once in charge of Africa, but that we are no longer". The same year, on the occasion of his predecessor Tony Blair's visit to the DRC, he had written on the Telegraph: "These pangas will perhaps stop cutting their flesh, and the tribal warriors will burst out laughing, like melons ".

Is it therefore possible to say that the United Kingdom of Elizabeth II is as racist and nostalgic for the colonies as the other European colonists? More ? In any case, between ennoblement of colonialism, denial of massacres, and general apathy, the Queen of England celebrated, last weekend, the dark history of her reign, that her Empire hides behind a dance that she granted, once upon a time, to Kwame Nkrumah. A dance that he must have regretted, moreover. 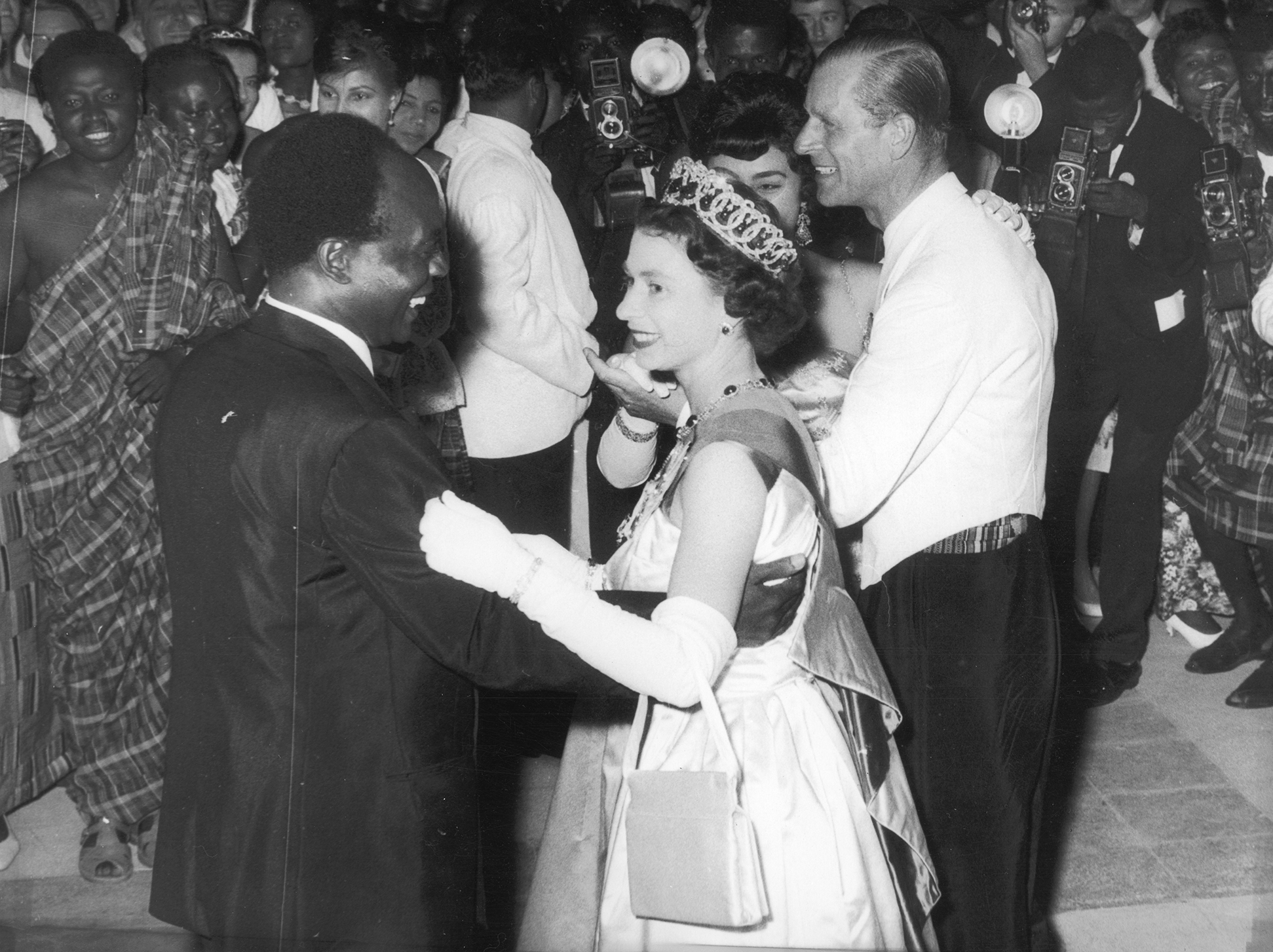