According to the American bank Goldman Sachs, Nigeria and Egypt will join the top 10 of the most powerful economies in the world by 2075.

Are Nigeria and Egypt the future locomotives of Africa? This is in any case the opinion of the bank Goldman Sachs. The American organization estimates, in its report “The Path to 2075”, that, in the medium or even long term, the two African states could become powerful economies. According to Goldman Sachs forecasts, by 2050, Nigeria and Egypt will join the top 15 of the world's greatest powers. A quarter of a century later, they would rank 5th and 7th respectively in the rankings. Today, none of the African countries has managed to break into the top 15. 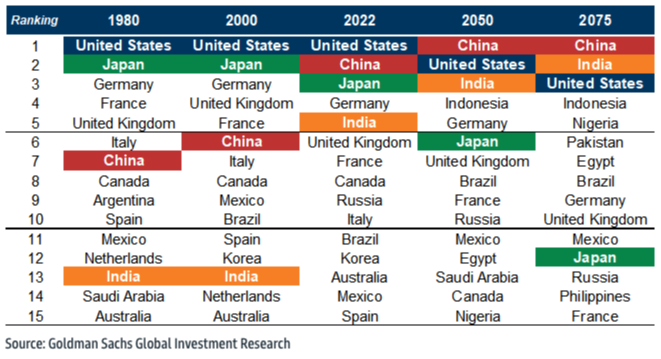 The revenge of the countries of the South

But by 2050, the world could well be turned upside down: the United States, according to the American bank, would have its first place stolen by China. Then in 2075, they would even be overtaken by India. Japan, meanwhile, should gradually drop in the standings.

“The prospect of rapid population growth in countries like Nigeria, Pakistan and Egypt means that with the right policies and institutions, these economies could become among the largest in the world,” predicts Goldman Sachs.

A major challenge therefore remains for these countries: meeting the demographic challenge. Because the American bank shows that it is the countries which will record a demographic decline force which will fall in the classification.

Hospital debt, the other issue in Tunisian-Libyan relations