Construction of the Great Mosque of Algiers, one of the Chinese projects in Algeria.

China continues to invest in North Africa. Will cooperation be based on different agreements from the older ones that unite China and the countries of sub-Saharan Africa?

"You don't catch the fox twice in the same trap", said Aristotle. Chinese cooperation with sub-Saharan African countries has sometimes been to the detriment of the latter. Several African states have turned to the Middle Kingdom, some fall into the trap of debt. Despite its reputation, China remains an important ally of Africa, which in recent years has had to overcome the financial crisis of 2008, the recession in 2015, the Covid-19 crisis in 2020 or even today. today, the economic crisis due to the war in Ukraine on the one hand, and the embargo against Russia on the other.

In the midst of all this, China is continuing its expansion into North Africa, but with new conditions. According to the Carnegie organization, “Chinese development strategies adapt to local realities”. “Trade between China and North Africa has grown significantly since the early 2000s, but it has largely replicated unequal trading patterns. Since their unveiling, the Belt and Road Initiative (BRI) and the Chinese government's 2016 Arab Policy Paper have signaled the promise of a qualitative shift in China's engagement in the region. China is committed to increasing investment in high value-added sectors and strengthening science and technology cooperation with North African countries.

In terms of figures, Chinese relations are not the same with all North African countries. The Middle Kingdom has especially set its sights on Algeria and Egypt. 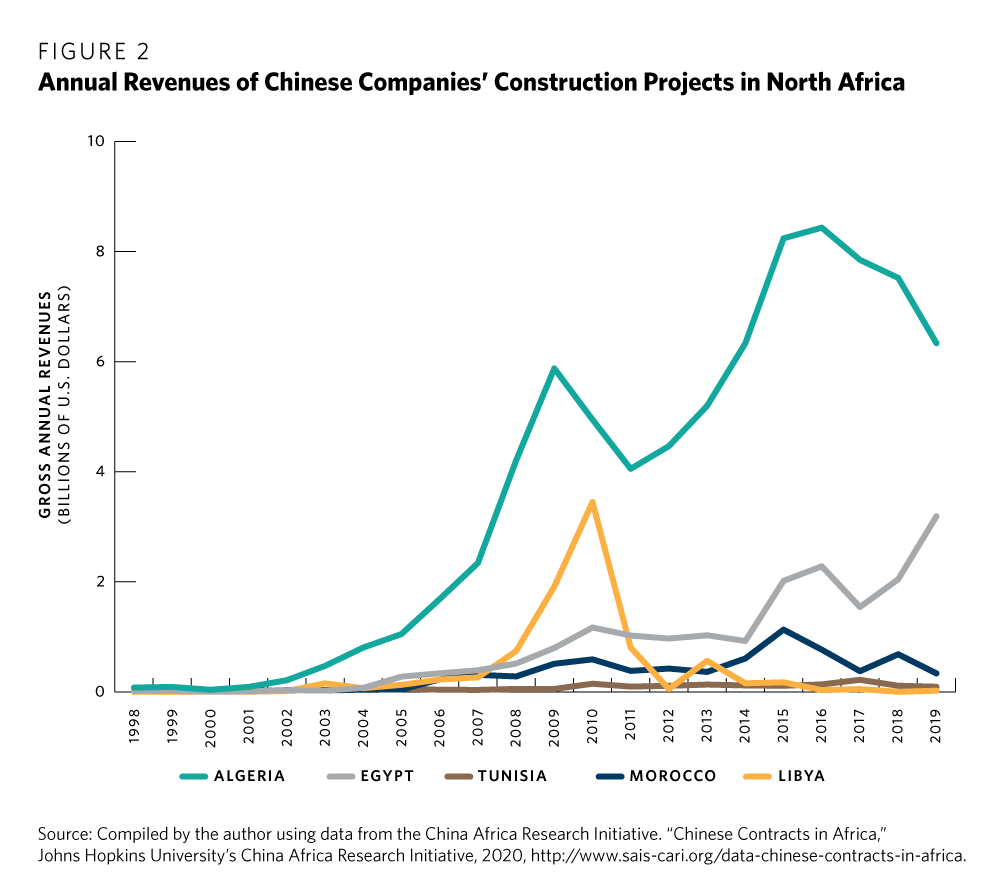 Sino-Algerian relations are historic. With more than 40 nationals in Algeria, China has the largest foreign community in the country. In 2015, there were already 790 Chinese companies having obtained infrastructure, import of goods or other contracts.

At the end of March, the Chinese companies Wuhuan and Tian'an formed, with Sonatrach, the Algerian Chinese Fertilizers Company (ACFC). A mega-project for the production of phosphate fertilizers estimated at 7 billion dollars.

But in terms of trade, Algeria and North African countries in general are increasingly in deficit, importing far more than they export to China. In 2020, for example, Algeria imported $5,6 billion worth of goods from China, with exports not exceeding $XNUMX billion.

The same year, Egypt imported 13,6 billion dollars of Chinese goods against just over 900 million in exports. A trade deficit that would explain the "generosity of Chinese banks and companies in North Africa". Because, unlike the countries of sub-Saharan Africa, China's direct investment is very limited, not exceeding 3,5 billion dollars, or 8% of China's foreign direct investment in Africa, and 0,15% in the world.

Precisely, unequal trade relations are offset by Chinese competitiveness in terms of infrastructure. The contracts won by Chinese promoters in the Maghreb amount to 70 billion dollars between 2009 and 2019.

Among the most substantial projects is the east-west highway, which stretches along northern Algeria. A 1 kilometer highway built by the Chinese company Citic-Crcc. The same company which, moreover, had built two-thirds of the Algiers-Abuja part of the trans-Saharan road, and financed a large part of it against maintenance contracts.

In Tunisia too, Chinese public works companies have proven themselves. The construction of the hospital in Sfax, the second largest city in the country, was completed in record time: 14 months. Same for the project the Diplomatic Academy in Tunis. A university that will replace the Diplomatic Institute for Training and Studies (IDFE), built in three years and entirely financed by the Chinese side.

Between Coca-Cola and Castel, the war has only just begun

In Niger, the hunt for the soldiers of Mohamed Bazoum