393 children were rescued by authorities in Abengourou, eastern Côte d'Ivoire, last week. Yesterday, 48 Burkinabe minors, destined to work illegally in mines, were repatriated. In total, more than 600 victims of child trafficking have been counted in Côte d'Ivoire since the beginning of February.

At least 48 Burkinabé children destined to work in agricultural plantations or illegal mines in Côte d'Ivoire have been rescued from their captors and repatriated, announced the Ivorian Minister of Women, Family and Children, Ramata Ly. -Bakayoko. "We have organized the return of these children rescued by the police, eager to return home and find their families," she added. The minister promised zero tolerance for crimes against minors.

Police said 227 minors aged 7 and 18, the majority of whom were Burkinabés, were intercepted in Aboisso last month as they moved from a camp in the forest to a mine where they worked. . Four traffickers have been brought to justice.

Child trafficking crimes are on the increase in Côte d'Ivoire, more than a thousand children were rescued during the year 2020 and 97 traffickers were transferred to the courts, according to Luc Zaka, the deputy director of the fight. against child trafficking and juvenile delinquency.

Numbers that give chills

According to a 16-year-old Burkinabé who was part of the group, the traffickers had promised a salary of around 76 euros per month, but nothing was received by the boy for six months.

According to the International Cocoa Initiative (ICI), a Swiss foundation created by the chocolate industry to combat child labor in the sector, around 800 minors were engaged in cocoa cultivation between 000 and 2013. Despite many awareness campaigns, the phenomenon seems to be getting worse. The best-known face of the fight against trafficking and forced child labor is that of the Ivorian First Lady Dominique Ouattara, which sponsors the National Action Plan to Combat Child Trafficking.

Criminal networks are increasingly exploiting young people in Burkina Faso, but also in Nigeria, Niger, Mali and Benin. And despite the treaties concluded with border countries to fight against child trafficking, Côte d'Ivoire has tens of thousands of foreign children working in agriculture and mining. The more likely reason is the increased difficulty of tracking these foreign minors, unlike Ivorian children. 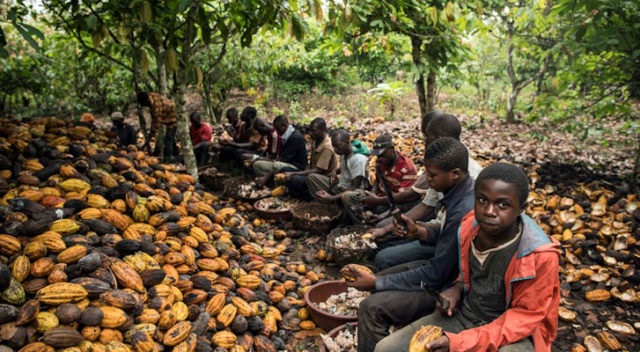 What solutions for the exploitation of children by cocoa farmers?

ICI had warned last year against a possible resumption of traffic due to the rise in cocoa prices which generates an increase in the need for labor. In West Africa, according to the same organization, more than a million miners work in the plantations.

The regular practice of forcing miners to work on plantations is the norm for cocoa farmers. For various reasons, these young workers even train their own children in the trade in order to reduce the cost of labor on family farms. It is estimated that about one in three miners living in the cocoa-growing regions of Côte d'Ivoire and Ghana, which account for over 60% of the world's cocoa production, works on a plantation.

Large multinational cocoa and chocolate companies have often been accused of turning a blind eye to these violations of children's rights in order to maintain favorable market conditions. And with the inevitable regulation of cocoa cultivation in Côte d'Ivoire, for which NGOs are increasingly lobbying, cocoa farmers are racing to increase the size of their plantations to ensure high production, even in the event that they have to hire adults for this work.

DJ Arafat, bandit or prophet? The legend of the little Ivorian nouchi who became Zeus of Africa

Moulay Mouhand, the heroic "Lion of the Rif"