Cameroon confesses to crimes against civilians committed by the army

This Tuesday, a statement from the Cameroonian Ministry of Defense confirmed that the army had indeed killed nine civilians in the English-speaking North West region. One of the victims was an 18 month old girl.

In an unusual admission, Cameroon's Ministry of Defense confirmed the murder, by the army, of 9 civilians in the English-speaking region. The victims are four men, four women and an 18-month-old baby. According to the Cameroonian government, this was an "inappropriate reaction, unsuited to the circumstances and manifestly disproportionate to the refusal to cooperate by hostile villagers".

The press release from the ministry, however, qualifies the facts, assuring that "the soldiers, in a hasty reaction of self-protection, used their weapons". 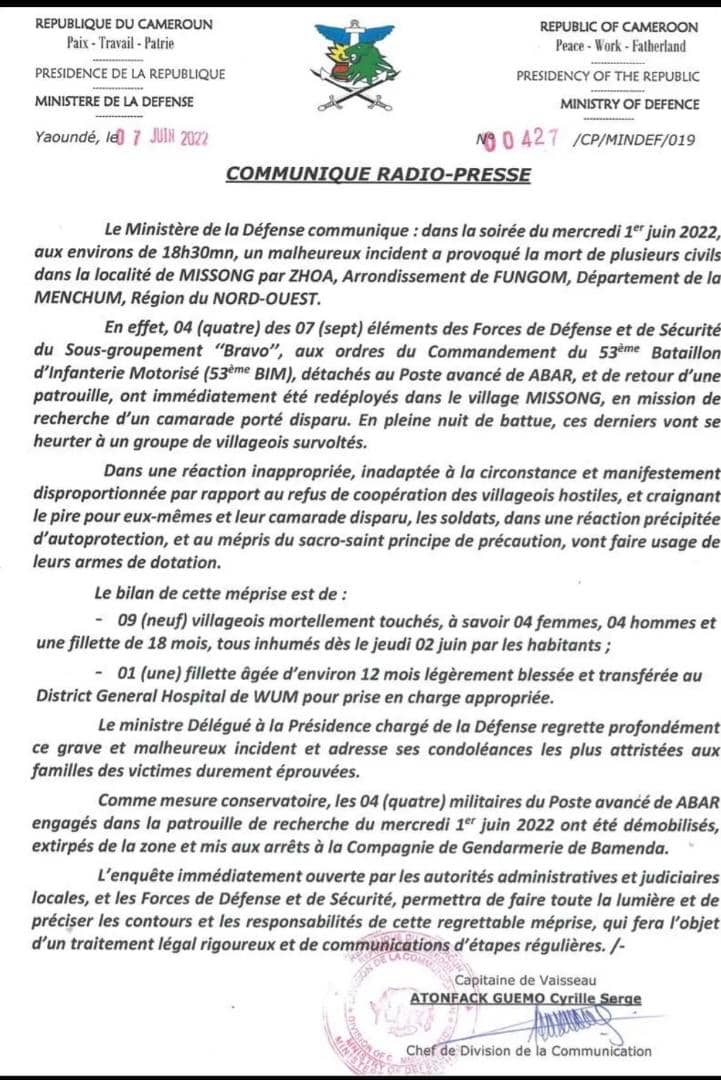 The confession of the Cameroonian authorities concerning these abuses comes a few months after three damning reports, published by Human Rights Watch (HRW), on the massacres of civilians in the English-speaking region.

The NGO has, in recent years, deployed a lot of resources to prove, through testimonies, reports and satellite imagery, that the civil war between the government and the Ambazonian rebels had caused thousands of civilian victims.

Following this tragedy in particular, which occurred on June 1 in the locality of Missong in the North-West region, 4 soldiers of the 53rd Infantry Battalion of the Cameroonian army were arrested. Another child, 12 months old, the sole survivor of the massacre, was transferred to hospital.

According to HRW researcher Ilaria Allegrozzi, “Cameroonian security forces show disregard for human life during their operations in the North West region”. "Killings of civilians, especially children, are serious crimes that should be credibly and independently investigated and held accountable," said the researcher.

Three other proven massacres of the same kind have been revealed in recent months. The first, in 2019, was filmed by a soldier and unveiled by the United Nations High Commissioner for Refugees (UNHCR) in its latest report on the situation in Cameroon. The other two are part of the investigations of the NGO HRW in the region. A total of 173 killings of civilians by the Cameroonian army alone in the North West are proven. But the government statement on Tuesday is the first admission of abuse by the army.

Since 2017, three regions of Cameroon have experienced a rebellion. In the north of the country, the army is facing Boko Haram terrorists. And in both cases, the security situation is worrying, but also carefully concealed by the state.

Last year, the Cameroonian government accused Ambazonian rebels of killing several civilians in the South West. For their part, the leaders of the separatist groups have published dozens of photos denouncing the strategy of the Cameroonian army in the region, which consists of burning villages and agricultural fields. On the media side, the focus is more on the humanitarian crisis. The Cameroonian state, which is also suffering from an internal crisis against the backdrop of the war of succession in the seraglio of Paul Biya, launched a constituency campaign of 10 soldiers, of whom nearly 000 had already been admitted to the recruitment competitions at the end of May.

Did the United States demand that Africa boycott Russian cereals?